I've been resident at Leeds College of Art and Design as part of the AA2A (artists access to art colleges) programme, and I have been developing work from The Fine Art of Rejection which happened in July 2008.

During that project I pulped all the paperwork for a project that did not come to fruition and I ended up making little sculpted sheep from them. They look like this: 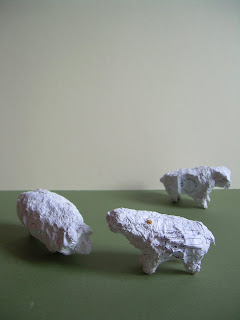 Whilst at the college I wanted to develop the rejections that the public had submitted at the show last time. For months I have been pouring them through my mind, writing them out rewriting them, printing then in colour, taking some words and highlighting these, but it all seemed to be a waste of time because the material I was working with was much more precious that anything I could do to it. So I left it as it was and scanned the rejections which you can see online here.

Which just left me and the sheep. On an early Spring afternoon in the Lake district the sheep and I went into a friends outdoor studio and had a look through what we had got so far. The materials from the rejections was great but it lacked anything visual, so the sheep and I decide to animate some of the stories. We took lots of photographs that afternoon. 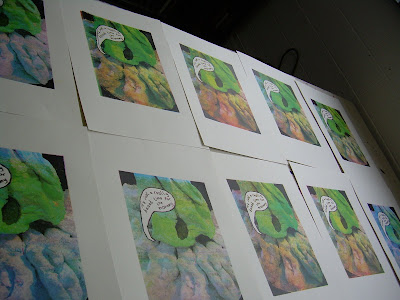 I took these images back to the college and started to work with them in photo shop. I had been speaking with some of my peers at an artist crit session at Project Space Leeds and we talked about children's story books as a way making the whole rejection theme a lot more light hearted. When I would stay with my Nana in Dublin when I was young I'd watch loads of TV because she had extra channels. I loved the Clangers and their beautiful strange world. I thought these images should have some of this other worldliness about them. This then allows them to take on unearthly characters and they can speak and animate the rejections. 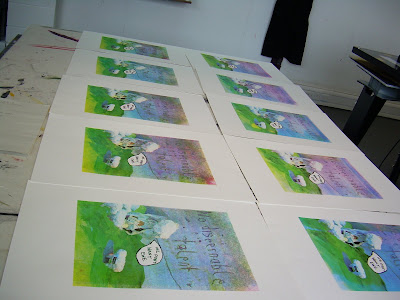 I selected some of the statements from the rejections and use these as well as some prints I had made before to creat the final image. My residency was in the print room so I sought advise from the technicians and they suggested a CMYK seperation. That sounded good so I went about doing that. It took time to get everything together but once I got going I was thrilled with the results. I would make 10 of each image and when I had finished I would then select the best based on a criteria of well exectuted, bright, clear, not marked and central on the page. 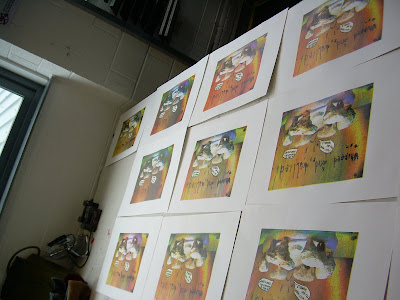 Although I had a criteria, how it actually happen was this: Look at the first one, now look at the next -better or worse? Next better or worse? And then when it came down to it did the four chose look well together - actually one looked duller so another not so well executed but brighter was selected. That's just how it goes!
It was a coincedence that I happen to have had 36 rejections submitted last July and now I had 36 rejected images so I have named each of these after a rejection. 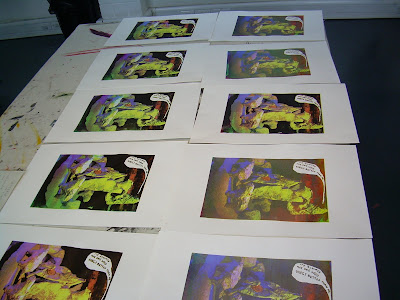 On 16th April 2009 I will be holding an event as part of the preview for the show of mine and the other three artists work. It will begin at 6pm and finish at 8pm. You will be able to see the selected and rejected artwork, there will be performance from Scott Senogles MMusc and Rus Pearson, and an opportunity for the public to be involved in this piece of work.
Posted by Rebecca Strain at 08:09